translated from a text by Michel Janssens

Skipper for “Cruise and Learn” cruises since he was 19, Olivier has left France 33 years ago to sail the world. His combined passion for the sea, the mountains and virgin spaces soon led him to polar regions where he settled. He is the first French skipper to carry out the Arctic Ocean crossing under sail (North West Passage 1999). After spending some time in Patagonia, Tierra del Fuego, Alaska, Canada, Siberia and Greenland, he is now based in Tromsø in northern Norway. His never fed passion for the North keeps him open and curious of the world which surrounds him, and gives him many oportunities to learn more each day from these so called “hostile” areas which he choose as his favorite play-ground.”

Olivier knew when he was fifteen that his passion for sailing would command his life.
At 18, an intensive navigation program forced him to graduate as a ” home schooled” student.
Answering the call from wide spaces, he leaves France at the age of 23 after successfully presenting exams for phys. ed. teacher and taking classes at a Nautical and Oceanographic Institute as well as gaining knowledge in marine architecture.

The Amazon will be his first “adventure land” as he will discover it kayaking and on board a trimaran. The wrongfully named Green Hell will be a favorite terrain and will give him the oportunity to rapidly buy his first boat. During two years he will then forget his Captain attire and work as a businessman to bring back afloat three companies in financial difficulties. During these two years, his free time will be devoted to studying some of the last black caymans in the Kaw ponds, or to canoe up the large streams to go and meet with the Amazon Indians.

It took him a two year journey around South America, of which one year spent in Tierra del Fuego and Patagonia, to realize that his favorite deserts where the icy ones. Curiously, it is in the Grenadines (W.I.) that at the age of 30, Olivier settled his base camp for his future expeditions. Since then, he will never cease to bring his ships bow towards polar regions and go back in the Grenadines for a couple months only. The Alaska and British Colombia have soon become his favorite playground.

At the age of 39, he sails back to Europe with his first mate Jean Michel Guillevic through the North West passage. Since then, he has settled in Tromsø, Norway, north of the Polar Circle, and created 69NORD. In 2008-09, Olivier led the expedition « Around North America » through the North West passage again onboard “Southern Star”. The Canadian coast guard Henry Larsen onboard the “St Roch” is the only one who have sailed twice the North West Passage before him, onboard a sailing boat, it was during world war two.

After seventeen years of sailing to some of the most remote corners of the planet, I returned to Europe through the “North West Passage”. We were the third sailing boat, since Amundsen, to achieve the passage within a season. I received such a warm and friendly reception from the general public and the media, that I realized that, over and above my own satisfaction in our achievements, I had something worthwhile to share with others. My wishes in human adventures was bigger than ever… That’s how 69NORD was born.Olivier Pitras 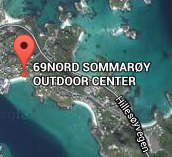